Autumn has been a season of seal watching so far and last weekend was no different. It was also another new location for us, taking a boat from the port of Harwich in Essex with Sealwatching.co.uk. The boat left from the quay at Harwich Dock and motored out through the port, past the huge shipping … END_OF_DOCUMENT_TOKEN_TO_BE_REPLACED

Those very few of you who may follow this blog will have seen that we go to Burnham-on-Crouch quite often to see the seals and back in mid-September my wife and i went again, this time with baby Benjamin! This time, it was just a day trip, but we did go again with Discovery Charters and … END_OF_DOCUMENT_TOKEN_TO_BE_REPLACED

So, our first proper holiday with baby Benjamin. A week in Cape Town and Hermanus with the main aim of seeing some southern right whales (after our failure to do so in Western Australia) and also African Penguins.  It’s the beginning of spring in August in the Western Cape, not peak season for most tourists, … END_OF_DOCUMENT_TOKEN_TO_BE_REPLACED

So, a flying visit…literally. An Easyjet flight up to Inverness on a Friday night, 2 nights in Nairn and a flight back to Gatwick on Sunday evening, all with a 4 month-old baby? Sounds crazy, but we had heard about the Scottish Dolphin Centre a while back, where you can potentially see bottle-nosed dophins from … END_OF_DOCUMENT_TOKEN_TO_BE_REPLACED

Hong Kong. This high-rise metropolis is known for many things, from Bruce Lee to Jackie Chan, from its colonial past to the famous Star Ferry, but what you might not know about is some very rare (and endangered) wildlife.

What wildlife can I see?

Fishing in the South China Sea

Hong Kong DolphinWatch is the only eco-tourism operator in Hong Kong that is dedicated to this creature. They are also focused on raising awareness, both within Hong Kong and abroad, of dolphins and the threats to them, which are many. The  dolphins can mainly be found in the seas between Lantau and Hong Kong Island and this habitat is being affected by the construction (and the additional pollution that it brings) of the Hong Kong-Zhuhai-Macau Bridge and the proposed extension of the international airport that is located on Lantau.

How to get there

Hong Kong International Airport is a major hub so you can fly there from most major international airports. The quickest way to the city is on the Airport Express train that stops at both Kowloon and Hong Kong stations. You can get a cab into the centre, but the roads are often busy and its just quicker to get the train.

Hong Kong has a modern, fast, efficient metro system, which makes it easy to get around. Although you can get the metro to cross from Kowloon to Hong Kong and vice-versa, you must, at least once, try out the iconic Star Ferry, a ritual for thousands of Hong Kongers for decades.

What else can I do there?

Hong Kong is not a large place, but they certainly have many attractions to keep you busy, however, the best thing to do in Hong Kong is to explore the city, the juxtaposition of the old versus the new and to people watch.

Most people’s first stop would be to take the Peak Tram to Victoria Peak and although the view’s are incredible and the tram is an experience, the visitor centre at the top is a tourist trap. It’s better to get out and explore the peak on foot.

Lanatau Island is home to Disneyland Hong Kong (although we did not visit) and the Tian Tan Buddha. The Buddha is at Ngong Ping, which is reached by cable car from Tung Chung. The Buddha is certainly impressive and is located next to the Po Lin monastary which is also worth a visit. The area between the cable car and the Buddha is also a bit of a tourist trap, but you can buy some nice ice-creams which are welcome in the sticky heat. 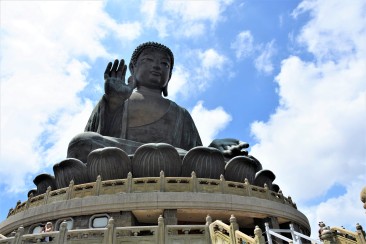 I’m a big fan of Hong Kong cinema, so the Avenue of Stars, which has statues and handprints of many of its biggest stars was a highlight for me. Although the Avenue of Stars itself is closed at present for renovations, the hand prints can still be seen nearby.

One of our favourite places in Hong Kong was Stanley that is found in the South-East of the Island. It’s much more chilled out than centre, has some nice markets and streets to wander round.

There are a wide range of places to stay in Hong Kong, from extravagant international hotels to backpackers. We certainly wouldn’t recommend where we stayed (Shanghai Hostel, in the infamous Chung King Mansions), but it certainly did offer a unique Hong Kong experience, is cheap compared to many places and is in the heart of Tsim Sha Tsui in Kowloon.

If your budget is endless then you should probably look at staying at the Peninsula, a Hong Kong institution.

Hong Kong is a foodie heaven, home to dozens of Michelin stared eateries, many of which even those on a backpacker budget can afford.

One of the best (and cheapest) is the dim sum restaurant Tim Ho Wan. There are actually a number of branches of this restaurant now, but we visited the Sham Shui Po restaurant. The menu is almost completely in Cantonese (with some english), but a couple on the table next to us helped us a bit. You just circle your selections on the paper menus with a pencil, hand it in and within minutes delicious dim sum is arriving at your table.

Another great place to eat is the Jumbo floating restaurant, found on Aberdeen, in the south of Hong Kong Island. This monolithic floating palace can only be reached by boat (shuttles run to and from a couple of different piers). The food is really very good, but it is pretty expensive.

As you can imagine, there are quite a few bars in Hong Kong, but we found ourselves gravitating towards some of the high-level and roof-top bars, to get exceptional views across the world-renowned skyline. Our favourite was the Eyebar for its stunning views and non-pretentious atmosphere. 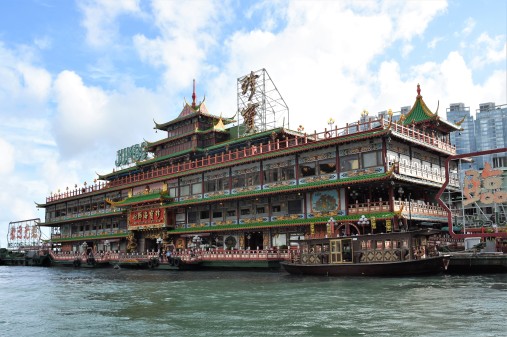