It’s that time of year again – seal pups in Norfolk

It’s December, so that means it was time for our annual pilgrimage to North Norfolk to see the grey seals and their pups at Blakeney Point, Horsey Gap and, now Winterton. Like everyone else, we’ve not traveled as much as usual this year (i wonder why? ;-)), but we couldn’t miss this trip. Braving the … END_OF_DOCUMENT_TOKEN_TO_BE_REPLACED

Those very few of you who may follow this blog will have seen that we go to Burnham-on-Crouch quite often to see the seals and back in mid-September my wife and i went again, this time with baby Benjamin! This time, it was just a day trip, but we did go again with Discovery Charters and … END_OF_DOCUMENT_TOKEN_TO_BE_REPLACED

So, our first proper holiday with baby Benjamin. A week in Cape Town and Hermanus with the main aim of seeing some southern right whales (after our failure to do so in Western Australia) and also African Penguins.  It’s the beginning of spring in August in the Western Cape, not peak season for most tourists, … END_OF_DOCUMENT_TOKEN_TO_BE_REPLACED

So, a flying visit…literally. An Easyjet flight up to Inverness on a Friday night, 2 nights in Nairn and a flight back to Gatwick on Sunday evening, all with a 4 month-old baby? Sounds crazy, but we had heard about the Scottish Dolphin Centre a while back, where you can potentially see bottle-nosed dophins from … END_OF_DOCUMENT_TOKEN_TO_BE_REPLACED

An Easyjet flight up to Inverness on a Friday night, 2 nights in Nairn and a flight back to Gatwick on Sunday evening, all with a 4 month-old baby? Sounds crazy, but we had heard about the Scottish Dolphin Centre a while back, where you can potentially see bottle-nosed dophins from the shore and decided we had to go.

The Scottish Dolphin Centre is run by the Whale and Dolphin Conservation (WDC) charity, through which Heather has adopted one of the dolphins, Spirit. It sits on the mouth of the River Spey in a former salmon fishing station. We started the day with a tour of the ice house where, as the name implies, was used to store ice for preserving the salmon back in the day. The ice house is now used for exhibitions and “dry dives”, where videos of underwater wildlife is shown. After a nice lunch in the centre, we went on a guided wildlife walk (2.15pm, April 1st to October 31st) with Adam, one of the guides.

Mouth of the River Spey 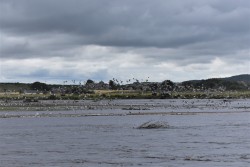 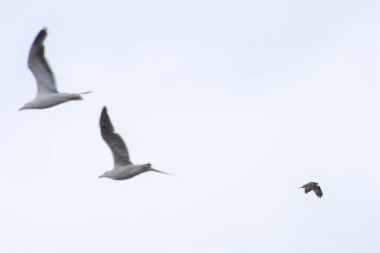 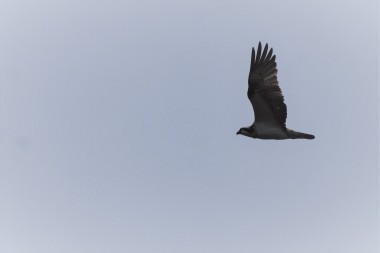 The walk, started with some time looking for dolphins from the centre, but alas with no luck, so we headed along the river spotting huge number so gulls and other seabirds. Soon after something spooked them and sure enough 2 osprey appeared from up river. We trekked along the river looking for otters, but again nothing this time. After the tour, Heather and I went further down the river and crossed the old railway bridge, now converted to be part of the national cycle network and as we crossed, another osprey came over head.

Another view from Burghead Visitor Centre

After the Dolphin centre, we drove to a few other places along the firth where there is supposed to be good chances of seeing more wildlife, Portgordon for seals, Burghead (dolphins from the Burghead Visitor Centre – a former coastguard lookout) and Hopeman East Beach (dolphins again), but had no more luck. That was the enough for day one, so head back to our apartment in Nairn for dinner and good nights sleep.

Sunday morning, we drove down to the Clansman’s Harbour for a boat trip on Loch Ness with Jacobite cruises. We just did a short trip from the harbour to Urquhart Castle and back, but it was enough to get a good feel for the Loch and to hear all the stories about the fabled monster. We had some time to kill following the cruise so we drove a few miles down the road to the Loch Ness Centre for an immersive exhibition about the monster and all the attempts down the years to prove whether or not it really exists. Let’s just say, it is unlikely!

A grey seal in the Inner Moray

A cormorant drying out on the Inner Moray Firth

A common tern on the Inner Moray Firth

Our last activity for the weekend was a wildlife cruise with Dolphin Spirit from Inverness Marina. Dolphin Spirit offer two tours, one on the Dolphin Spirit which is more sedate and another on Dolphin Mischief, a RIB, for the more adventurous. With our little one, we were on the Dolphin Spirit this time around, but otherwise we would probable have taken the RIB. It was a nice trip, no dolphins again, but we saw some grey seals, some cormorants and a common tern.

It was a great weekend, with beautiful coastlines and countryside, lovely people, nice food and some nice wildlife spotting, but no dolphins this time round. However, it was enough to make us want to go back, for a week at least next time!

Grey seal pup from our trip to North Norfolk last week, pre-lockdown.
Lockdown, but not out.
A kestrel hunting on Roundshaw Downs on a lockdown walk
"On my one piece of exercise today..." a slylark
In lockdown it's comforting to think back to happier times. We all travelled to the South Island of New Zealand over New Year and early January. All of these were taken on the Otago Pensinula. WARNING: extreme cuteness alert!
Red deer stag taken last week in Richmond Park before things got properly crazy. We're not going back for a while as there are just too many people! Keep safe and keep your distance.
Alcatraz from Pier 39, San Francisco.
A "raft" of little blue penguins coming ashore at dusk on the Otago peninsula, South Island, New Zealand. It was taken at about 10pm at night with a very high ISO. They come ashore in as a big group as a tactic to avoid predation after a long day of fishing and feeding.